A new Green Government? - A review

Dominic Dyer is CEO of the Badger Trust and author of Badgered to Death The People and Politics of the Badger Cull. He has written another guest blog for us: 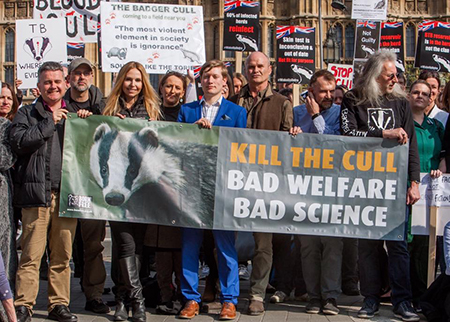 Since the snap General Election of June 2017, animal welfare and wildlife protection issues have risen to the very top of the political agenda. Theresa May learned a very hard political lesson by flirting with the Countryside Alliance and pledging to allow the return of fox hunting during the election campaign. This combined with a willingness to allow the continuation of the UK ivory trade to appease the antiques lobby, caused a huge explosion of anger on social media and led to a remarkable mobilisation of young voters that helped remove the Prime Ministers working majority in the House of Commons.

Once the dust had settled on the outcome of the election and the pollsters had dissected voter trends and key trigger issues in the campaign, it soon became clear to senior figures in Downing Street that the Tories needed to rapidly shed their image as a political party that was driven by short-term economic interests with little concern about protecting the environment, wildlife and animal welfare.

A number of key figures emerged to bring about a fundamental shift in the positioning of the government on Green and animal protection issues. Sir John Randall a former Deputy Chief Whip and a long-serving MP with a distinguished record on the environment, was brought back from retirement to serve as a Special Advisor on the Environment to the Prime Minister in Downing Street.

Zac Goldsmith MP, who bucked the political trend to win back his Richmond Park seat from the Liberal Democrats in the General Election, rapidly became a key voice on the backbenchers and in the media for a significant repositioning of the government on environment and wildlife protection issues.

The key agent for delivering a bold new Green vision for the government was to be Michael Gove, who became the surprise appointment of the post-election reshuffle when he returned to the Cabinet as Environment Secretary.

Since entering his office at 17 Smith Square, it has to be said that Michael Gove has had a significant impact on both Defra and the wider government agenda. He is no eco-warrior, but he is clearly interested in policy issues and has delivered some major achievements from banning products with microbeads, use of insecticides that harm bees and other pollinators, preparing the ground for a comprehensive UK ivory trade ban, CCTV in slaughterhouses and even the re-introduction of beavers to our rivers.

However there is one issue Michael Gove cannot change and that is the power of the farming lobby over senior policymakers in Defra, particularly when it comes to dealing with the badger cull.

Since taking up his new Cabinet post Michael Gove has given the impression that he is willing to listen to all sides of the argument in relation to the role of badgers in the spread of bovine TB to cattle. He has held meetings with the Badger Trust and Save Me Trust, he has brought together leading scientists to review the evidence to support the culling policy and he has held out the hope of a comprehensive review of the TB reduction strategy, including the badger cull element.

However on Friday 16 February the Michael Gove green revolution finally came off the rails, as his junior Farming Minister George Eustice announced that a review of bovine TB policy would take place, but this would exclude any investigation of the badger cull policy.

To make matters worse, along with the TB policy review announcement, the government also launched a consultation process on a huge expansion of the badger cull into low-risk TB areas of England.

To rub salt into the wounds, the government also finally released TB test data taken from over 900 killed badgers in the 2016 culls that indicated that less than 15% carried TB, with only 3% suffering from late-stage TB where they could be at risk of spreading the disease to other badgers.

There can be no doubt that Sir John Randall, Zac Goldsmith, Carrie Symons and many other key figures within the Tory Party realise that badger culling is political poison to the electorate. It is hugely damaging to any attempt to create a positive animal welfare friendly image that appeals to young voters, which the Tories badly need to stand any chance of holding on to power at the next election.

Should Michael Gove allow a huge expansion of badger culling into the Low Risk TB areas it will effectively destroy the Badger Protection Act and push badgers to verge of local extinction in large parts of the country where they have lived since the Ice Age.

So if the decision to extend culling is so unpopular with the public and significantly sets back Michael Gove’s efforts to Green the image of the Tory Party, why has he decided to take this precarious path?

The answer lies in the balance of power within Defra. Unlike most government departments it’s not Ministers in total command of policy with civil servants being responsible for implementation. The National Farmers Union has just as much power and influence over policy decisions taken in Defra as the Environment Secretary.

As I said in my book ‘Badgered to Death’ in many ways the NFU act as a government agency when comes to farm and disease control policy. This is definitely the case on the badger cull, which has been largely led and implemented by the NFU often behind closed doors at Defra, away from the scrutiny of both Parliament and the public.

In recent months the NFU has been working overtime to prevent Michael Gove from caving into growing political and public pressure to do a U turn on the badger cull policy.

Using their close political allies in Parliament including Neil Parish a farmer who chairs the influential Environment and Rural Affairs Committee, they have relentlessly kept the pressure on Michael Gove to keep killing badgers.

Minette Batters who is likely to become the next President of the NFU has spearheaded the badger cull campaign. Minette never loses an opportunity to play the badger blame game when it comes to bovine TB.

She constantly pushes aside any concerns on the cruelty of culling or low TB disease rates in badgers and does not hide her intention to see badgers largely removed from areas of the country where livestock farming takes place.

However in the months ahead the NFU is sailing into increasingly troubled waters on the badger cull issue.

As the public cost of the badger cull rapidly exceeds £50 million and Brexit cuts off tens millions in EU support funds for bovine TB control, Michael Gove has no money to spare for a huge expansion of the cull policy into the low TB risk areas.

The Information Commissioner Tribunal has recently forced Natural England to release all the details on the ecological impact assessment for the badger culls. If as expected this shows that Natural England has little understanding of badger population levels or the impact of large-scale badger removal on other predators and ground-nesting birds, including in areas of Specific Scientific Interest, this could prove very damaging to the policy going forward.

Tom Langton who took up the Information Commissioner case, has also now received confirmation that he can take forward a Judicial Review in the High Court on failures in the supplementary cull licence consultation process, which could have major implications for any new cull licences being issued.

On top of this, the Bureau of Investigative Journalism is about to release the results of the six-month study that shows farms in the cull zone areas are failing to take basic hygiene and disease management steps to reduce the spread of bovine TB in cattle.

The Labour Party who recently published a new Animal Welfare Plan which has stopping the badger cull as one of its key objectives, it also now sensing a political opportunity to undermine the credibility of Michael Gove on his continued support for such a hugely costly, cruel and ineffective policy.

Over the next few months we can expect to see growing calls from MP’s across all the political parties for Defra to include badger culling in the bovine TB policy review process.

As the purse strings tighten at Defra and Brexit looms, we are also likely to see growing concerns within the farming industry that the NFU obsession with badger culling is both a dangerous waste of limited financial resources and a huge distraction from putting in place more effective cattle-based measures aimed at reducing the spread of bovine TB.

The badger cull debate is no longer just about the protection of one species that has found itself at the centre of a disease control problem in cattle. It’s a battle for the future our countryside and farming industry, the very nature of our government and how seriously all political parties take public concerns over wildlife protection and animal welfare.